About our Stock Producers and Entertainment 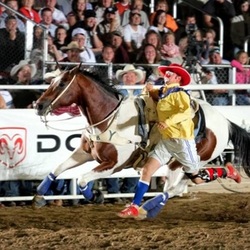 
John Harrison lives in Soper, Oklahoma with wife, Carla, daughters Addison & Billie and son Cazwell. He has a degree in Ag.-business and is a certified Equine Massage Therapist.

John was six when he received his first trick riding lesson after watching a trick rider perform at a nearby rodeo. Since then he has trained and performed with many of the best trick riders in the world.

John became a member of the Professional Rodeo Cowboys Association (PRCA) in 1999, as a trick and roman rider, and trick roper. He has since diversified and added barrelman to his PRCA card.

Today John entertains with his walk & talk comedy that is backed by his quick wit, and with his strongest acts; Miss Rodeo Universe and Comedy Trick Riding. 2010, a new breed of magician hit the rodeo trail and this is one disappearing feat that would leave Houdini puzzled.

John has been selected to perform 3 times at the prestigious Wrangler National Finals Rodeo in Las Vegas, NV. Seven times he has been nominated for Comedy Act of the Year, four times nominated for Coors Man in the Can, and four times for PRCA's Clown of the Year. 2012 John picked up the coveted award of Comedy Act of the Year, and he hasn't stopped smiling since. Blessings have continued as he was voted to work the 2013 Wrangler National Finals Rodeo.